a quest for clarity - part 1

Yesterday I awoke at 10:45am, sitting straight up in my comfy chair. As the fog began to dissapate from my brain, I blinked my eyes to moisten the contacts that were stuck to my eyeballs. My clothes from the night before were still on, albeit slightly more wrinked.

The first person I thought of was Nate. I knew he had an early afternoon flight, and was prone to sleep late. I tried his cell phone, and he didn't pick up. Undeterred, I called his room at the Michangelo, and got him on the second ring. It was a very brief call.... I told him that I just wanted to make sure he was up. He said I was "the bomb", and that the car was picking him up in ten minutes. My good deed done for the day, I began the arduous process of recalling what took place the night before.

6:15pm: Kristine pulls up in the driveway. She had stated earlier in the day that while she did plan on joining us for dinner, she wasn't going to stay with me at the Michelangelo. She had been traveling quite a bit, and didn't want to "piss Sunday away" by staying out til the wee hours of the morning, waking up late, and traveling back to Jersey. She knows us well. I decided that she was probably right, so I decided to ride back with her instead of staying at the hotel.

7:00pm: We arrive at the hotel at the time Nate told us to meet. After getting through the full body cavity search just to get in the door (security was just a taaaad bit excessive), I call Nate, who says they are at Sax. Whuh?? "Oh, we'll be there in about ten minutes, but dinner isn't until 9:30." Whuh? In the WHUH????

7:10pm: Kristine and I order our first Kettle One & Tonic. Hereafter referred to as KOT. 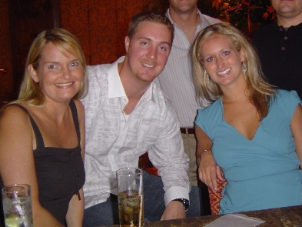 9:00pm: I finish KOT #5, and we all leave for a "party". Turns out, two of the three surgeons weren't going to make it for dinner. But the third surgeon, the one I didn't know very well, was going to be bringing along four friends of his. Ummm... ok? Tom tells me just to "go with it", he'll figure out some way to expense this as a legitimate business dinner. I remind Tom that this legitimate dinner is in thirty minutes, but I'm told that this party is where we are supposed to meet Surgeon #3 and his posse.

9:15pm: Pimped Out Pad. I'm immediately uncomfortable as I take in the surroundings. About ten beautiful people of Middle Eastern descent are lounging on the floor, some propped up on velvet pillows of various colors. The owner of P.O.P. comes out of the bathroom, and looks so completely bombed that I'm surprised he's even standing. I take comfort in Random Beer found in the fridge, and suggest that "some of us" go on ahead to the restaurant to ensure not losing our reservation. Kristine -- "I'll go!!" Andy -- "I'll go with you!!" Me, staring at their dust -- "Crap."

For the next thirty minutes, I make polite but painful conversation with two Iranian anesthesiologists. I pretend to receive a call from Kristine, and lie that we MUST. GO. NOW. or we'll lose our table for ten. Tom gives me the thumbs up on the way out the door.

10:00pm: We FINALLY make it to Megu, a Japanese restaurant that is only half the size of Tokyo. As the waitress brings me KOT #7, I'm transfixed by the giant melting Buddah. 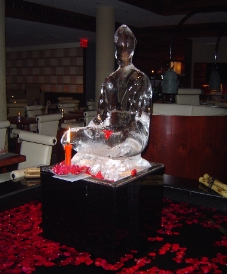 Tune in tomorrow as we switch from KOT to sake, girls swim around in fish tanks, the timeline gets blurrier and blurrier, and I come to the end of my quest - only to realize that I would've been better off not knowing what the night had in store.


feeling... you see where this is going, right?