When I woke up Tuesday morning, I had an email from my friend Rebecca from Atlanta, that just said "Please call me. I have bad news about Bill."

After the initial panic, I went online to see if there was anything in the paper or news. He was a pilot. Was there a plane crash? There was nothing. I convinced myself that he had just gotten into the normal trouble that our group always seemed to find ourselves in.

She told me that he was dead. That he was found in his apartment by his brother, and had been dead for at least five days.

I think that's the hardest part.

Knowing that he was there for so long, and that nobody knew. That his brother, whom he was so close to, had to find him that way.

No, I guess the hardest part is knowing that I'll never see him again. Never be able to talk to him again. I hear his voice in my head.

There are so many unanswered questions.

Since his death, it's now out in the open that he had a terminal illness. At first Rebecca told me, "supposedly he had Hodgkins Disease." I knew that couldn't be right, and have since confirmed that he did have Huntington's Disease.

He was found with a bottle of nitrous oxide, or laughing gas. Some people are assuming that he did this to himself.

That's not right. He wouldn't do this. He wasn't in the advanced stages of the disease. He was about to start a new job. He was moving to Miami. He was happy.

He wouldn't do that.

I never did tell him that I knew. Occasionally I would ask him how he was feeling, and he would change the subject. I debated for so long over whether to tell him or not. To let him know that I knew, and that I didn't think any differently of him. That I still loved him, no matter what. That I would be there for him.

It would either be comforting to him, or he would shut me out completely knowing that I knew. I couldn't risk the latter.

So I decided to wait. And now it's too late.

It hurts so bad knowing that he's gone. I called him in March on his birthday, and that's the last time I spoke to him. He had asked me to meet him in Buenos Aires over New Years. Just a spur of the moment thing. Oh God, why didn't I go?

I'm flying tomorrow to New Orleans, which is where he grew up and his family lives. They are burying part of his ashes next to his father, and the rest will be spread over the ocean by a colonel (pilot) that he was close to. I think he would want that.

I have so many regrets, and I miss him so much. I don't understand this at all.

I love you, Bill. Forever. 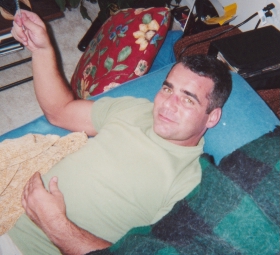